Buying an Electric Motorcycle vs Gas Motorcycle: A Comprehensive Comparison 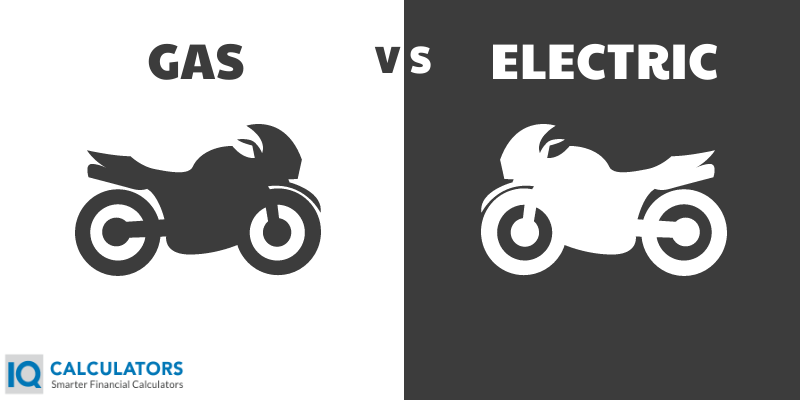 Electric motorcycles, much like electric cars, have become trendy in recent years.  Most people automatically think that they will save enough money on gas to make it worth the purchase.  Or they want to care for the environment and go green.  In this article, we will do a high-level evaluation to let you examine the pros and cons of purchasing an electric bike.  There's probably some obvious ones you've considered, as well as ones that might surprise you. 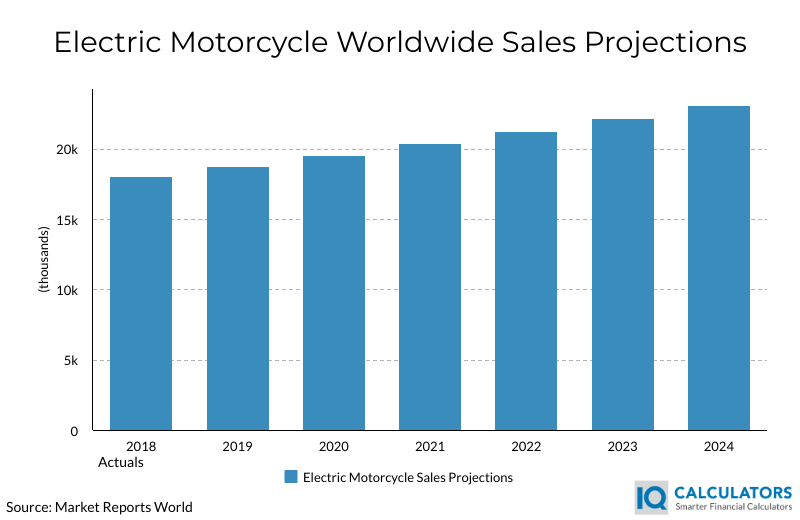 Maintenance for an electric bike involves changing a drive belt at prescribed mileage and changing tires and brakes as needed.  There just aren't that many maintenance items on an electric motorcycle.

Maintenance for a gas bike involves changing the oil, changing the battery, and changing other various fluids on which your motorcycle depends.  These gas-powered maintenance items are in addition to the items already mentioned with electric bikes.

Electric bikes can be ridden immediately after starting.  There's no need to allow warmup time to reduce wear and tear on the bike like a gas-powered bike.

Save Money on Gas

Saving money on gas is a big one.  For many, this is the number one reason people purchase an electric bike.  Similarly, this is the reason most people buy motorcycles in the first place, whether gas or electric, is to spend less on gas.  Purchasing an electric bike takes these energy savings to the extreme.  Later on, we will look at this more in-depth with a cost-benefit analysis.

With an electric motor, there's less friction since the engine doesn't have as many moving parts, causing friction.  However, an electric motor can overheat as well if a vent gets blocked, and it isn't getting enough ventilation.  There are other potential causes, but again, it is less likely that overheating takes place.

Although electric vehicles usually can't go as fast on the top-end as gas-powered motorcycles, they can get up to speed just as well as gas-powered bikes if not faster.  Technology has improved so that you aren't sacrificing anything when it comes to acceleration.

Range Before Charging Is Improving

One of the main concerns with electric vehicles, in general, is that they don't have a long enough range before needing to be recharged.  Fortunately, battery technology is improving, and the range is improving with it.  As demand for electric vehicles grows, technology to reduce charging times will also improve.  And there are more and more charging stations getting added all the time.

The fact that electric motorcycles are greener than gas motorcycles is valid.  It is a fact that they produce much less CO2 per mile traveled.  However, there are also unintended consequences for the masses owning electric vehicles.  We will take a deeper dive into this subject later in this article.

The extreme cold can reduce a batteries charge.  Everyone who has operated a cell phone knows that when it's cold, the battery life decreases drastically.  Some electric motorcycles have self-warming batteries, but warmth takes energy.  No matter how you dice it, the cold saps a battery's energy.

Battery Disposal and Replacement is Expensive

The minerals and molecules that get used in an electric battery are expensive.  These include minerals like lithium, cobalt, and nickel.  And these minerals can be hazardous if they reach the water supply, which makes it imperative to dispose of them properly.  The primary challenge with battery disposal is that the cost to recycle a battery costs three times the value of the minerals recovered from recycling.  Just the lithium alone recovered from recycling costs five times what it would cost to mine.  Until this cost-benefit ratio, improves, battery-powered motorcycles present a long-term challenge.

A quiet motorcycle could also be considered a positive characteristic.  However, we are speaking from the perspective of driver safety.  Because an electric bike is very quiet, it eliminates one of the senses that drives can use to detect if another vehicle is nearby.  Sure, the most essential sense of eyesight is still there, but hearing is the second most important, and you likely will not be heard on a battery-powered bike.

Battery Degrades From Lack Of Use

If you don't use the motorcycle regularly, the batteries can degrade over time more quickly than it would otherwise.  Just see this response from Zero to a complaint from a user filed with the Better Business Bureau.

Some people only care about one thing when buying an electric motorcycle or vehicle, and that one thing is the environment.  Here are the hard facts as it relates to the environment and electricity generation versus gas power.  The amount of carbon dioxide(CO2) created from one gallon of gasoline is 19.60 pounds.  For the science nerds out there, a gallon of gasoline weighs roughly 6 pounds.  When it gets used to fuel a car, combustion causes a chemical process that causes the components of gasoline to combine with oxygen, causing the CO2 created to weigh more than the original weight of the gasoline.

The weight of the gasoline before creating CO2 isn't all that important.  What is important is how this compares to CO2 created from electricity generation so that we can understand the relative environmental impact.  Fortunately, the Energy Information Administration tracks the amount of energy generated and from what sources so that we can get an accurate estimate of how much CO2 gets created when generating a kWh of energy.  On average, in the United States, there are .99 pounds of CO2 produced to generate 1 kWh of electricity.  For a state by state breakout, see the 2018 chart below.  Naturally, some states are better than others, but this can give you a more accurate picture of the environmental impact in the state in which you live. 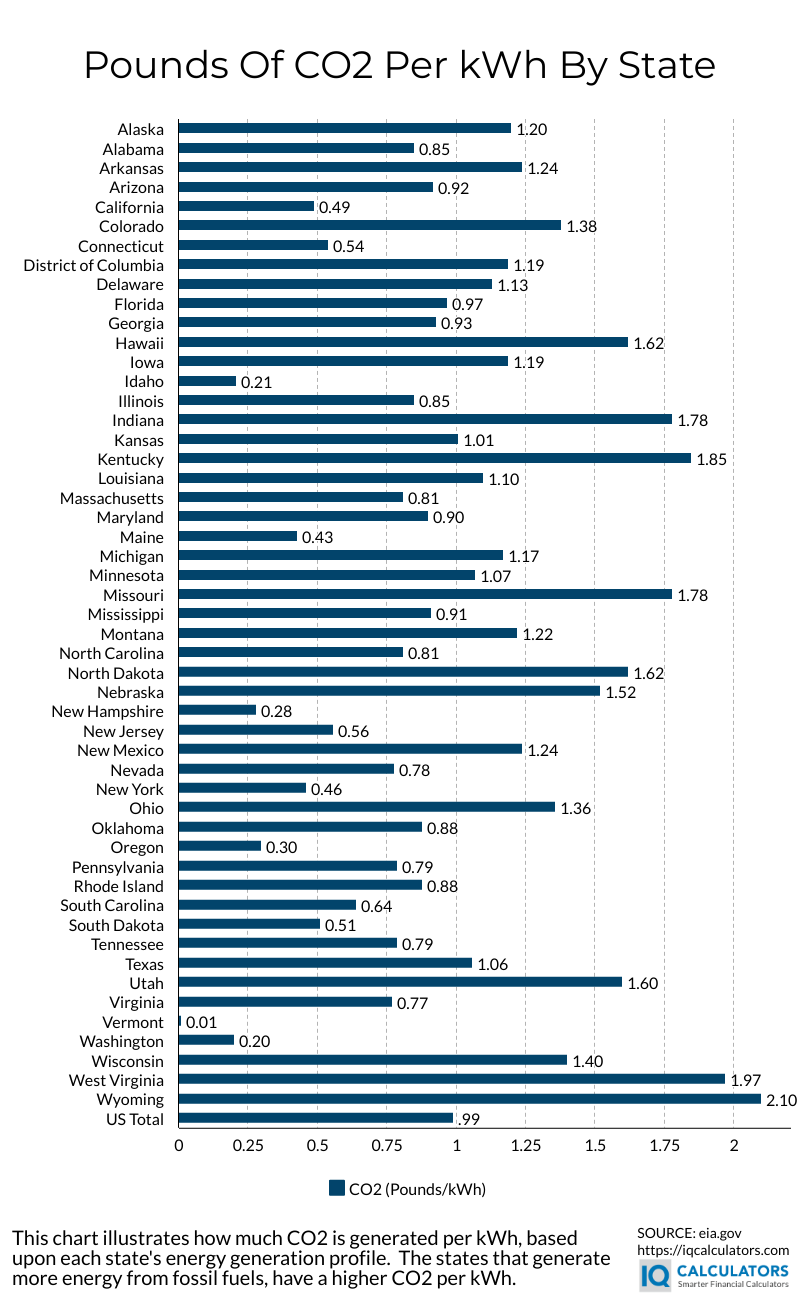 There's no arguing that an electric motorcycle will help motorcyclists emit fewer greenhouse gases.  The environmental downside, which isn't completely understood yet, is that the chemicals from the batteries will potentially contaminate water and other parts of our environment as electric motorcycles and other vehicles become mainstream.  But knowing that greenhouse gases are harmful, and not having enough data on the effects of battery contamination, it seems the environmental advantage is likely on the electric side. 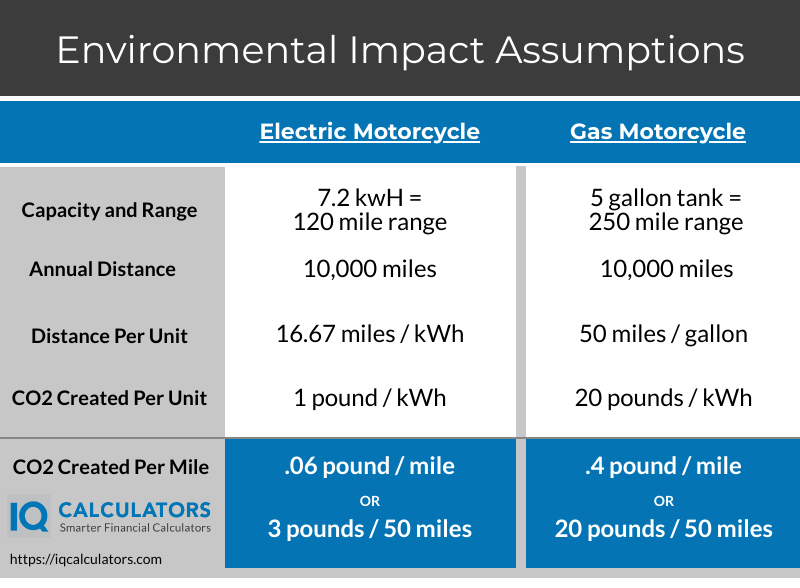 We've discussed some of the things that can't be measured.  Now we are going to use a real-life example to evaluate the financial feasibility of owning an electric bike.

For purposes of this illustration, we will assume that the average gas-powered bike can get 50 miles per gallon and can hold 5 gallons.  Now let's say that an electric bike with a 7.2 kWh battery can travel 120 miles before needing to be recharged.  That equals 16.67 miles per kWh.  At the time of this writing, the average cost of a kWh is 14 cents.  That means that it will cost about $1.05 for each charge.  The average price of a gallon of gas at the time of this writing is $2.50.  Taking $2.50 multiplied by 5 gallons equals $12.50 per refuel.

Now we come to a rather critical point.  How much does a "middle of the road" average motorcycle cost in each category?  For the electric motorcycle, we are going with the price of a Zero DS, which is a no-frills kind of bike that starts at eleven thousand dollars.  A Zero DS is the kind of motorcycle that you can ride around town but probably won't want to ride on the highways very much.  On the other hand, a regular gas-powered motorcycle of similar quality is going to cost around four thousand dollars.

One last factor to consider is how often an electric battery needs to get replaced.  Some companies have 5-year unlimited mileage warranties on their batteries, such as Zero Motorcycle Company.  Based on that, and with technology ever-improving, we will assume that a battery will need to get replaced every eight years.  We think that is being generous, so feel free to be more conservative in your assumptions.  And we are assuming that a battery will cost around 3,000 dollars. 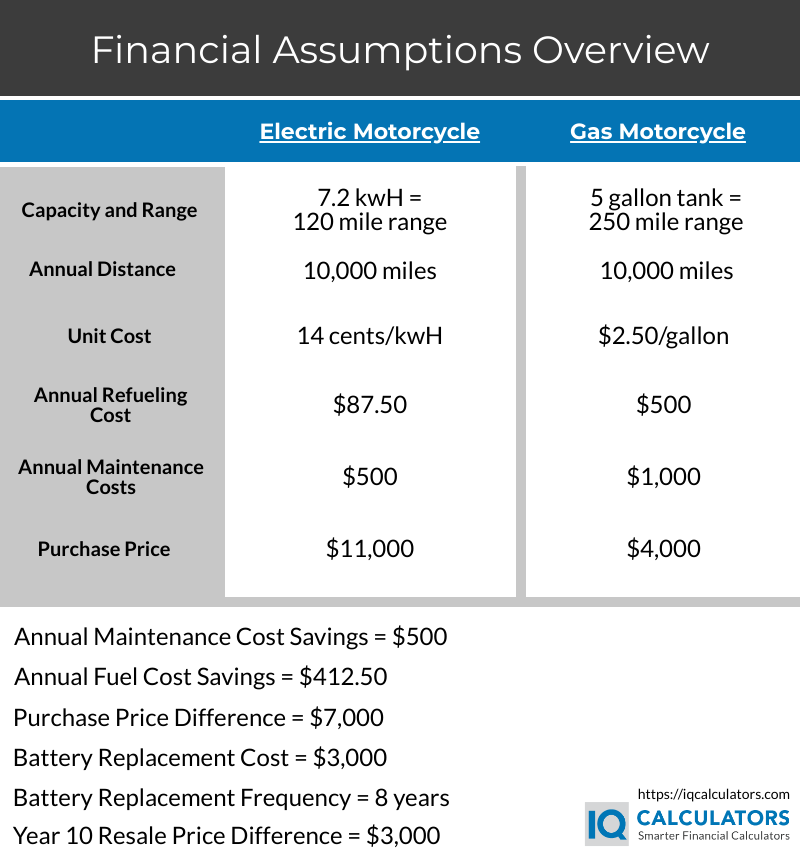 Based on these assumptions, we will save $912.50 per year in fuel and maintenance with an electric bike.  We will assume these cost savings increase each year by 3 percent as the cost of gas increases.  However, it will cost us $7,000 more to purchase, and we will need to replace the battery every eight years for 3,000 dollars.

We ran a 10-year cash flow analysis to calculate an IRR using an IRR calculator.  You can see the results in the chart below. 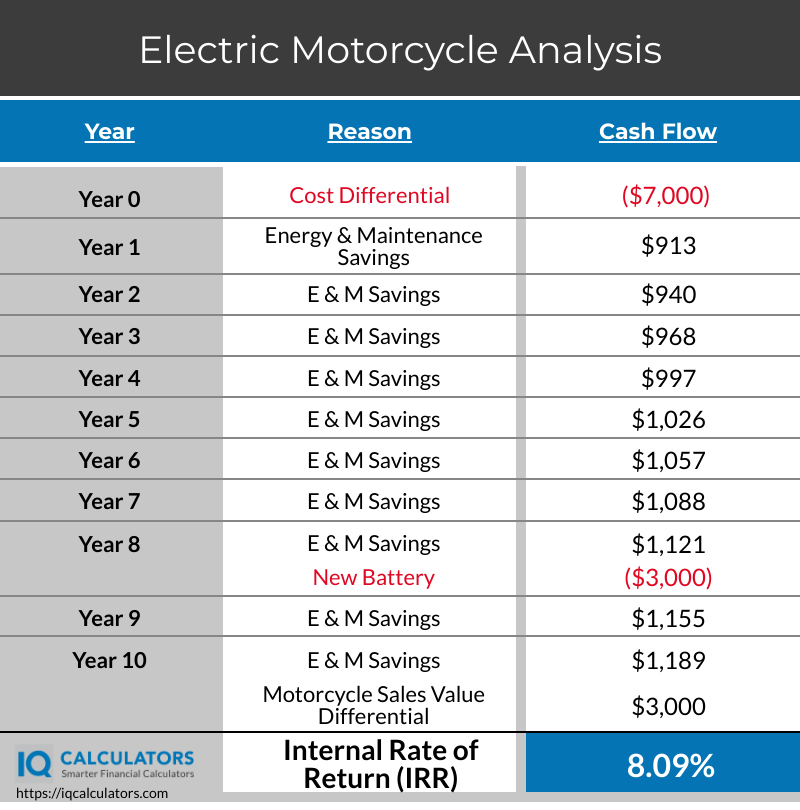 Please remember, these assumptions are not factoring in any electric vehicle incentives as they vary from state to state.  When doing your analysis, remember to look at the incentives offered in your state.

Economic assumptions are going to be unique to every person's situation.  It's important to remember that assumptions are only assumptions.  For example, in the scenario used above, what would happen if the person decides they are going to use the bike much less than 10,000 miles per year?  If this were the case, it would change the entire scenario and thus the result.  However, we hope these calculations can help form a reasonable baseline.  To be able to do these calculations yourself, all you need to be able to do is estimate savings and use an IRR calculator.

If you aren't considering buying an electric bike for its financial benefits, then consider the qualitative list compiled above.  We covered the general advantages and disadvantages of the two options.  But regardless of these, the environmental impact may be the most significant factor in the decision.  Only you know what the most critical factor is for you.