Yield To Worst: What It Is And Why It's Important

updated by admin | 1 year ago

The yield to worst is the term used to describe the lowest possible yield from purchasing a bond apart from the company defaulting.

The yield to worst is something that a bond investor needs to be aware of.  That's because it presents a risk if they are expecting to hold the bond until maturity.  For example, let's say the investor expects to receive a 5 percent yield to maturity.  However, if the bond gets called at the first possible call date, they will receive a 3 percent yield to worst instead.  There are no guarantees that the bond will get called, but it's a risk that the investor must keep in mind.  Later in the article, we will look at what causes a bond to get called.

What Causes Potential For Yield to Worst?

We just spoke about what causes the yield to worst to be possible.  It's when a bond has the potential to be called or is callable.  But why would a bond get called?  A bond will usually get called when interest rates become lower than when the bond was initially issued.  Let's say that the company issued a bond that paid a coupon of 5%, and now interest rates have lowered significantly.  If the company can now issue bonds paying a 4% coupon, then they will likely call the 5% coupon bond and reissue at the 4% coupon rate.

Difference Between Yield to Call and Yield to Worst

Both yield to call and yield to worst is calculated based on when a bond becomes callable.  So what's the difference?  Yield to call can potentially be a higher or lower yield than the yield to maturity, depending on if the bond gets purchased at a premium or a discount to the par value.  Rather, yield to worst will always be lower than the yield to maturity because it is calculated for bonds that get purchased at a premium to par value.

John wants to buy a bond that is selling in the market for $1,100.  The coupon rate is 6% meaning it pays $60 in coupon payments annually.  The bond is callable in 2 years but John plans to hold the bond until maturity which is in 10 years.  By using a yield to maturity calculator, it is calculated that the YTM is 4.72%.  However, if John's bond gets called after two years, the bond will be called at the par value, which is $1,000.  If John pays $1,100 for the bond and only gets $1,000 back at the call redemption, it means he would lose money, were it not for the $120 he received in coupon payments during those two years.  Thus, John came out ahead by $20 after two years in this situation.  By using a yield to worst calculator, we calculate that the yield to worst in this scenario is 0.93%.

"THAT IS A BIG RISK IF THE BOND WERE TO BE CALLED!"

Here is the scenario above broken down by the numbers.  You can see, the only thing that changes between the two is the time frame.

When Yield To Worst Is A Risk

So how can one quickly identify the risk for a bond with a yield to worst lower than the yield to maturity?  There are just two things to look for to know if you are at risk.

If the answer to either one of these questions is no, then you are not at risk of a lower yield to call than the yield to maturity.

If the answer to both of these is yes, then there is a third, more subjective question to be asked. 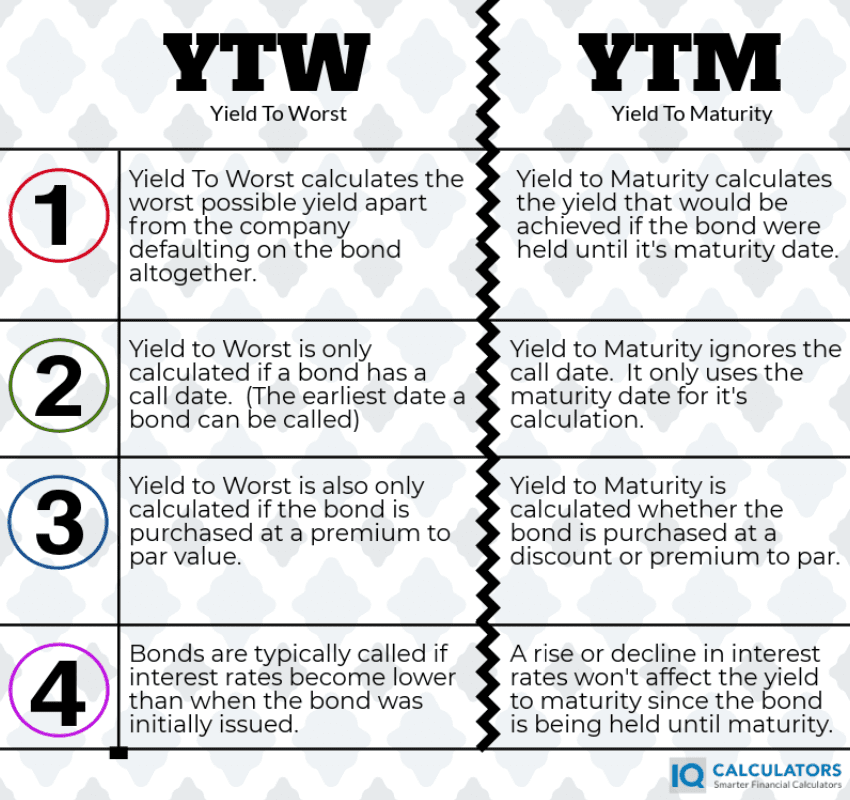 Yield to worst is calculated the same way as yield to maturity.  The difference is that it uses the years until callable rather than the years until maturity, which shortens the time the bond is potentially held.  This is primarily a risk if the bond is purchased at a premium to par value.  Knowing the yield to worst is essential for helping investors manage the risk of getting a lower yield or rate of return than expected.

IQ Calculators hopes you found this article helpful.  We are the number one online financial calculator site on the web.