Different Types Of Annuities And How They Are Named

Different Types of Annuities And Why They Get Their Names

The concept of an annuity is simple.  You pay money into the annuity, and when chosen, the annuity will make payments to you for a length of time.  As simple as that is, it becomes complex since there are so many different types of annuities and ways to structure them.

Here we will briefly describe the various types of annuities and what differentiates them from one another.

Annuities get named after one of four things:

Many times, an annuity takes on multiple names to describe more than one of its characteristics.  An example would be a single-premium immediate annuity, which represents when the annuity is annuitized(immediately), and how contributions get made(single-premium).

How Contributions Are Made

A single-premium annuity is a synonym for a lump-sum annuity.

An annuity where premiums get contributed to the annuity over time.  The annuity will begin making payments when the annuitant chooses.  Interest earned until then, is tax-deferred.  Payments can either get made in equal, regularly occurring amounts, or they can be more sporadic if necessary.

How Interest Is Earned

A variable annuity is an annuity that earns interest based on an underlying market investment such as the S&P 500 or Russell 2000.  Individual mutual funds are also an option to be held inside a variable annuity.  The point is that the interest earned inside the annuity will depend on the performance of a market instrument and will vary year to year.  Interest earned inside a tax-advantaged annuity is tax-deferred.  Annuity rates of return from a variable annuity can be higher but also riskier than a fixed annuity.

An indexed annuity is something that has become more popular in the recent past.  It is a type of variable annuity, and the performance correlates to a market index of some kind.

Here's a quick chart showing the difference in annual sales of fixed annuities and variable annuities in the recent past. 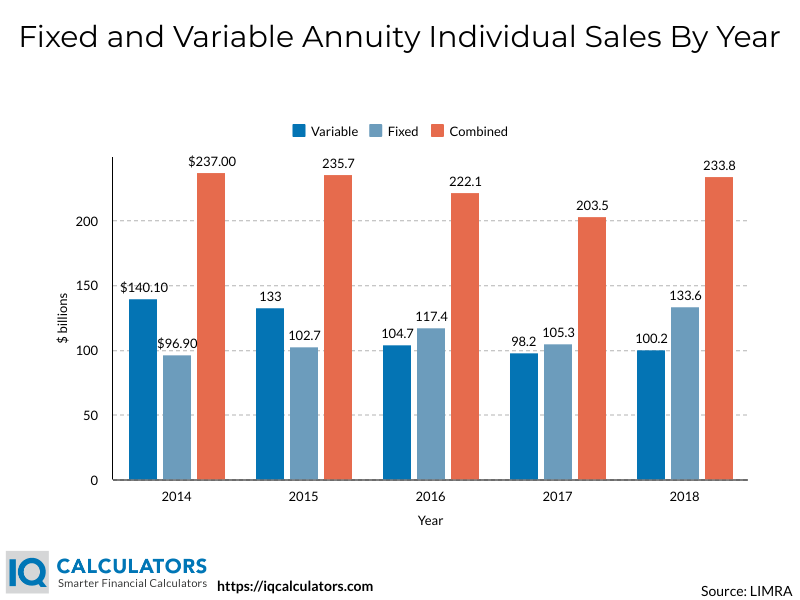 When the Annuity Is Annuitized

A life annuity describes an annuity that, once annuitized, makes payments to the annuitant until the death of the annuitant.  If a person dies before receiving their full premium, the money gets forfeited to the insurance company in most cases.  However, some strategies allow annuity payments or unused premium to pass on to loved ones after death.  Having payments continue after death will increase the risk to the insurance company.  Therefore, your annuity payments will likely be smaller than they would be otherwise.

As we have discussed at length in a previous post, annuity rates of return are rarely attractive, but annuities can and do serve a purpose.  By understanding how an annuity is named, you can know the type of annuity it is, and what its use may be.  Just remember the four main categories for naming an annuity.

Now that you know the different types of annuities, it may surprise you that there are annuity features called "riders," that can add a whole other level of features to annuities.  To take your annuity education one step further, check out this article about annuity riders.